Background: Endosulfan is a neurotoxic organochlorine insecticide, which is used worldwide for pest control and its residues have been remained for long periods in soil, water bodies and agricultural products. Objective: The aim of the present study was to isolate and characterize a bacterium from the earthworm gut which can degrade endosulfan without producing any toxic metabolites like endosulfan sulphate. Methods: Endosulfan was used as a carbon source by the bacteria and degraded it up to 90% within 15 days. The bacteria grew well in minimal medium with high concentrations of endosulfan (80µg/ml). Results: Almost complete degradation of the endosulfan insecticide was indicated by an increase in chloride ion in the growth medium. This strain was able to survive well at 45ºC and exhibited its capability for degradation of the pesticide. Conclusion: The results suggest that the isolated strain is valuable for bioremediation of endosulfan-contaminated soil and water bodies.

Endosulfan is a neurotoxic organochlorine insecticide of the cyclodiene family of pesticides. It is highly toxic and an endocrine disruptor, it is toxic to fish and aquatic invertebrates (1). Hans et al., studied the toxicity of endosulfan to earthworm metaphire posthuma and found that the symptoms of toxicity were dose dependent (2). And it is banned in the European Union, the Philippines, Cambodia, and several other countries. It is still used extensively in many countries including the US and India. Endosulfan has been used in agriculture around the world to control insect pests including whiteflies, aphids, leafhoppers, Colorado potato beetles, cabbage worms, and other pests. In India, more endosulfan is used than any other pesticide except mancozeb and monocrotophos, with almost 180 million pounds manufactured in the period 1999-2000. Because of its unique mode of action, it is useful in resistance management. In 2001, in Kerala, India, endosulfan spraying became suspect when linked to a series of abnormalities noted in local children. Initially endosulfan was banned, yet under pressure from the pesticide industry this ban was largely revoked. In 2006, in Kerala, compensation of Rs 50,000 was paid to the next kin of each of 135 people who were identified as having died as a result of endosulfan use.  These environmental and health concerns have led to an interest in post-application detoxification of the insecticide.

Endosulfan contamination has been detected in soil, water, air, and food products because of its abundant usage and potential for environmental transport (3, 4). Some bacterial and fungal strains that degrade endosulfan isomers in liquid culture have been isolated and characterized in many laboratories (5, 6). Some strains from soil were also found capable of degrading chlorinated hydrocarbon pesticides (7). The majority of the endosulfan biodegradation studies reported the formation of endosulfan sulphate (8, 9). The degradation product endosulfan sulfate has been found toxic to biomolecules isolated a soil bacteria Klebsiella pneumoniae KE-1 that degrades endosulfan without formation of the toxic metabolite endosulfan sulfate (10, 11).

Earthworms are often exposed to various pesticides and other organic pollutants in the soil and their intestines have excellent detoxification capability with a large number of aerobic and anaerobic bacteria (12), but their use in bioremediation of endosulfan-contaminated soil has so far not been studied. Endosulfan degradation by Rhodococcus isolated from earthworm gut also reported for its degradation potential without producing any toxic metabolites (13).  The aim of the present study was to isolate the bacteria from the gut of earthworm which can degrade endosulfan very effectively without producing any toxic metabolites like endosulfan sulphate.

The earthworms used in this study were collected from fields having past histories of endosulfan contamination. Mainly these earthworms collected from the places such as Muthalamada mango tree plantations and Attappadi cashew plantations. Mature and healthy earthworms of equal size were stored under laboratory conditions for 1 week. Further, they were treated with 1µg/g of technical endosulfan in soil by the soil pot method (2).Then these pots were exposed to specific environmental conditions such as temperature and humidity.

ISOLATION OF THE ENDOSULFAN DEGRADING BACTERIA

The earthworms were then dissected, the gut was aseptically removed (14) and homogenized in phosphate-buffered saline (pH 7.0), and the gut flora were cultured in minimal media (MM) containing 0.1 µg/mL endosulfan as the  only carbon source. The isolated bacteria from the earthworm gut were then purified on nutrient agar, (pH 6.5) plated in duplicate, and incubated at room temperature (30ºC) for 48 h. The isolated colonies were picked and streaked on nutrient agar to obtain the pure culture.

The gram staining has been done for the isolated bacteria to identify whether the bacteria belong to gram positive or gram negative groups.

The strain was streaked onto a nutrient agar plate and its sensitivity toward increased temperature was studied by keeping it in an incubator at different temperature ranging from 10 to 60ºC.

DETERMINATION OF PHOTO STABILITY OF THE ORGANISM

The degradation of endosulfan, with parallel uninoculated controls, was monitored by thin-layer chromatography (TLC) and gas chromatography (GC). The TLC was developed in hexane: chloroform: acetone (9:3:1), on silica gel 60 G plates, and separated spots were analyzed by AgNO3–chromogenic reagent.

Degradation of the endosulfan and bacterial growth were occurred simultaneously and an increase in chloride ion in the growth medium was noted, indicating almost complete degradation of the insecticide. The chloride content in the culture medium containing endosulfan was estimated calorimetrically at 0, 5, 10, and 15 days (15), after the incubation of bacteria. The 1.5 ml aliquots were drawn from the flasks. The cells were washed thoroughly by centrifuge (10,000 rpm for 10 min) to remove loosely bound pesticide. The supernatants were pooled which was then used for chloride ion estimation.

Bacterial culture was grown in nutrient broth. The overnight culture was centrifuged at 10000 rpm for 10-15 minutes. To the pellet, 100 µl of ice cold solution I (TEG) was added and vortexed for a few seconds. 200 µl of solution II (10N NaOH) was added, mixed thoroughly and stored in ice for 5 minutes. 150 µl of ice cold solution III (Potassium acetate (3M)) was added, vortexed for 10 seconds, the tubes were stored in ice for 3-5 minutes. This was then centrifuged at 13,000 rpm for 15 minutes. Equal volumes of phenol:chloroform:isoamylalcohol was added to the supernatant and vortexed. The contents were centrifuged for 10,000 rpm for 5 minutes. Ice cold 70% ethanol was added to the supernatant and kept in -20ºC overnight.  This was centrifuged at 10,000 rpm for 15 minutes. Supernatant was discarded and the tube was allowed to air-dry. The pellet was suspended in 10 µl TE buffer. The sample was electrophoresed in 0.7% agarose gel.

As shown in figure 1, most viable bacteria were isolated from the guts of earthworms collected from endosulfan-contaminated soil. Survival of the bacterial strain was studied successively in different concentrations of endosulfan. One strain was found to tolerate 80 µg/ml concentration of endosulfan. The isolated organism was found to be Gram positive. On observation under the microscope the cells are seen as violet rods. At 10, 20, 30, 40, 50 and 60 ºC, the thermal stability of the isolated bacterium was studied. Significant growth between 10 and 45C was noted for the isolated bacterium growing at 80 µg/ml. The same strain can survive at 45ºC. The strain survives well under exposure to sunlight.

The results described in table 2 showed that, the calculated CFU results were described in table 1. Biochemical tests were performed according to “Bergey’s Manual of Systematic Bacteriology”, for identification of the bacterial strains. Based on morphological, cultural and biochemical characteristics, the isolated bacterium can be characterized. Methyl red sowed high dense red color which indicates the positive reaction. Catalase (CAT) production with high effervescence when added with hydrogen peroxide. The citrate utilization test also found to be positive. Voges proskauer, indole production, and oxidase production were found to be negative.

α and β isomers were almost totally degraded with some residue of endosulfan diol in 15 days, when the qualitative analysis of the biodegradation product of endosulfan was carried out through thin-layer chromatography. Rate of degradation of endosulfan in the medium was of exponential nature and characterized by fast degradation at the initial stage followed by slow degradation when the degradation in the control flask (UI) was found to be very slow. The results explained in figure 2.

The current technique of culturing the most viable bacteria from earthworm gut microflora for endosulfan degradation is a simple and cost-effective one. Successful growth of this strain was observed in a minimal medium containing endosulfan (80 µg/mL) and survives well up to temperature of 45 ºC and under sunlight exposure. Both α and β isomers of endosulfan was degraded by the isolated bacteria. It is to be noted that, like other soil bacteria known for endosulfan degradation (6), it did not produce persistent and toxic metabolite endosulfan sulphate.

First and foremost I would like to express my heartfelt thanks to Lion Dr. K.S. Rangasamy, MJF, my college chairman for providing us with the necessary facilities required for completion of this project. The authors acknowledge the assistance of all the faculty members and technicians in the department of biotechnology for their valuable support and encouragement. 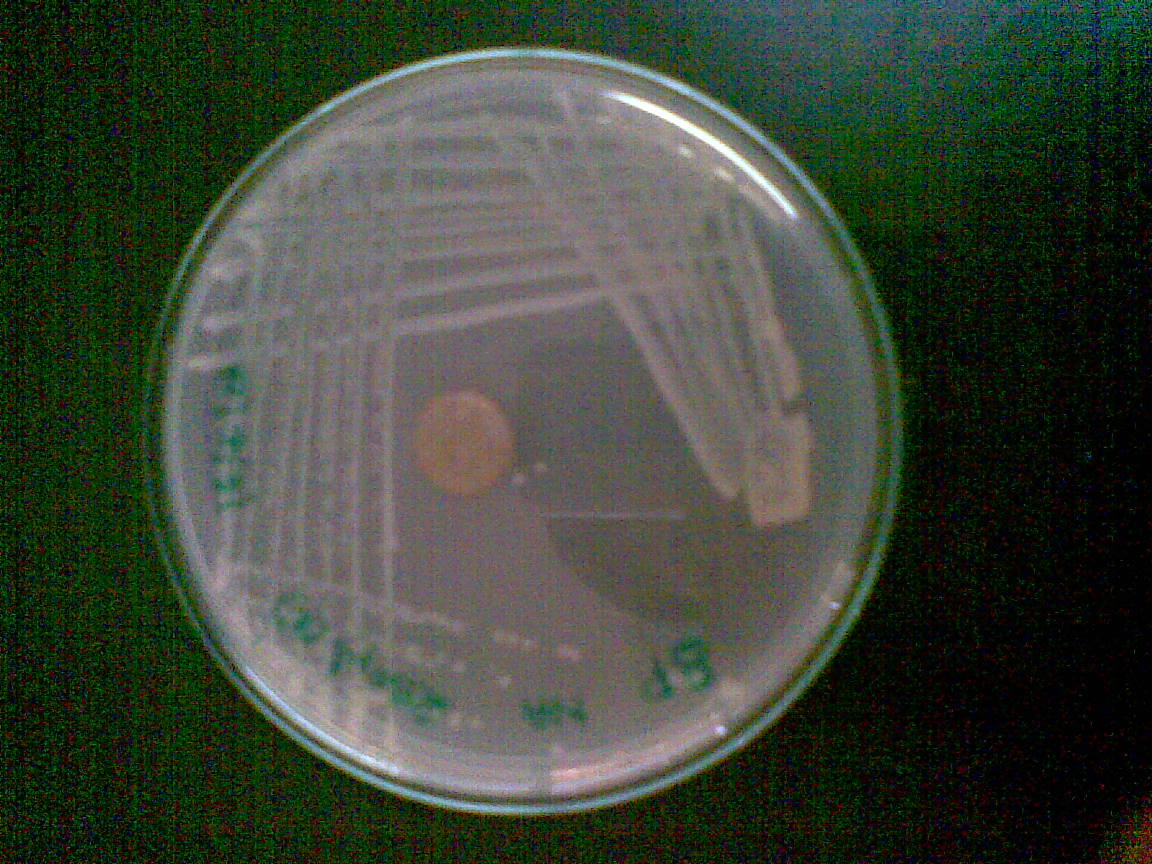 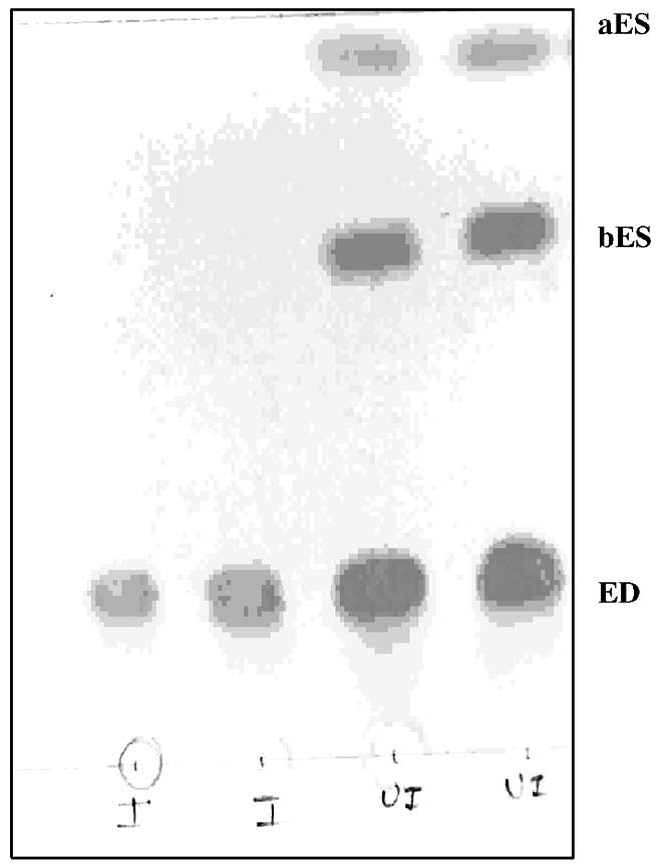 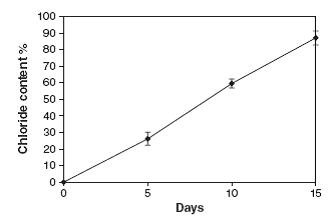 Figure 3: Release of Free Chloride Ions in 15 Days of Incubation 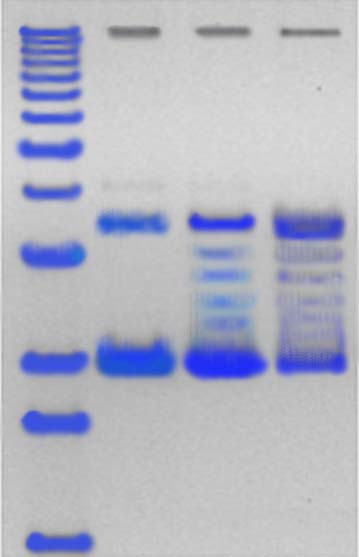