Driven by the boom of wealth brought by oil discovery and production, the high rate of urbanization and a steady increase in the per capita income, during the past years, has improved the socio-economic status of the people in the Arabian Gulf Cooperation Countries (GCC). This radical economic change has been accompanied by drastic changes in their lifestyle and food consumption patterns. During the past years, the regular consumption of traditional foods is being replaced with more Western-style and ready-made foods. In addition to adopting a sedentary life style in daily life and other related activities. According to National Health Survies in the GCC countries, high daily caloric intake, refined carbohydrates and protein were associated with increased risk of non-communicable diseases including colorectal cancer (CRC). The rate of CRC among GCC countries is in the rise; however, there is dearth of research exploring it. In particular, there is lack of research about role of folate on occurrence of CRC despite the recent flourishing scientific research papers from other parts of the world.

Cancer is considered a leading cause of death worldwide, accounting for 7.6 million of all deaths from a total of 58 million deaths reported in year 2005 and the (WHO) estimates that there will be 20 million new cases and 12 million deaths from cancer alone by the year 2020 (1). Furthermore the WHO reported that in Western countries, the rate of colorectal cancer (CRC) has increased dramatically as compared to other types of cancers, and this increase was attributed to westernization in food choices and dietary pattern as well as adopting a sedentary lifestyle (1). The Arabian Gulf Cooperation Council (GCC) countries include the following six countries: Oman, United Arab Emirates, Saudi Arabia, Qatar, Bahrain, and Kuwait (2).

The GCC countries have witnessed rapid change in many aspects of life during the last 5 decades because of the boom of wealth that coincided with the discovery and production of oil (3). This boom has transformed these countries from being traditional nomadic societies to become affluent metropolitan cities in a very short time. This rapid change resulted in an immense effect of the life style of people, and their social life. This is quite notable with the proliferation of western pattern of lifestyle especially in nutrition and physical inactivity (4). The rapid socio-economic transition might also have affected the pattern of cancer in these countries. It has been quite notable that incidence rates of cancer have increased in other countries that went through rapid industrialization because of the lifestyle risk factors including diet, physical activity, obesity which appears to play an important role in the etiology of the disease (5).

Recent reports indicate that migrant populations moved from countries of low CRC and incidence to the West adopted the high CRC incidence trend of the new country (6-8). These observations suggest that changes in diet and lifestyle might contribute to the incidence of CRC, and therefore research had focused in identifying the dietary pattern and lifestyle characteristics that might contribute to primary prevention of CRC. The international experts from the recent World Cancer Research Fund Report, 2008, concluded that CRC is a major public health problem and modernization in food choices, sedentary life style and increased life expectancy are the major factors that might synergize with genetics for the epidemic of CRC worldwide (9).

It is timely to conduct research studies to elucidate the underpinning risk factors of cancer, in general, and colorectal cancer, in particular, in the GCC countries. In the GCC countries, there are few published reports about the dietary pattern and lifestyle characteristics of CRC among adults. Generally, it has been noted that the rate of CRC among GCC countries is considered relatively low compared to most of western countries. Nonetheless, the pattern is in the rise (10). In Oman, CRC ranked third after breast cancer and stomach cancer (11). Similar pattern has been observed in Qatar and Saudi Arabia where it ranked second after breast cancer, and in both countries it constituted for 9% of the newly diagnosed cases (12). In a comparative review among Arab countries, it has been noted that the rates of CRC among Bahrain and Kuwait were higher than other Arab countries (10). Sporadic studies about CRC in the GCC countries do exist. They are mainly cross-sectional epidemiological studies that describe the pattern of annual change of cancer rates in general, and among them CRC is noted (13).  Fewer studies are case-control studies that explored underlying risk factors (14). To our best knowledge, studies that explore the relation between folate and CRC in the GCC countries have not been yet reported. The following sections provide an overview of the molecular mechanisms of the role of folate in occurrence of CRC.

There are several established dietary risk factors for CRC, largely related to folate and/or vitamin B12 deficiency (15, 16), diets from animal sources that are low in fibre and high in fat (17-19). Meanwhile, allium vegetables, fruits, pulses and foods containing selenium protect against CRC cancer (20-22). Non dietary risk factors for CRC include, decreased physical activity (23), obesity ,a body mass index (BMI) of greater than or equal to 30 kg/m2 (24, 25), genetic susceptibility (26, 27), alcohol (28, 29), smoking (30), and exposure to environmental carcinogens that may lead to proliferation and malignant transformation of colorectal cells (31, 32).

Folate and vitamin B12 deficiency induce carcinogenesis in susceptible persons, via mechanisms that involve cell signaling, cell division and DNA methylation. The protective effect of folate and vitamin B12 is attributed to its one carbon folate metabolism, including the methionine cycle that is regulated by ubiquitous enzyme, methionine synthase (MS). The mechanism involves the necessity of 5-methyltetrahydrofolate (5-CH3-THF) as a methyl donor and vitamin B12 as a cofactor for MS that regulates the homocysteine (HCY) remethylation to methionine and synthesis of S-adenosylmethionine (SAM), the universal biochemical methyl donor for all biological methylation reactions, including DNA methylation (33).Numerous studies have indicated that under conditions of low dietary intake of folate and vitamin B12, the methyl supply is low and consequently the MS activity is low concomitant with low SAM levels and DNA hypomethylation, a leading cause of mutagenesis and abnormal expression of oncogenes, which have been implicated in different types of carcinogenesis (34-36).

As illustrated in Figure 1, folate-dependent methionine cycle modulates HCY availability for the transsulfuration into cysteine. Homocysteine (HCY) is converted to methionine by methionine synthase enzyme (MS), which utilizes vitamin B12 as a cofactor and acquires a methyl group from, 5-methyltetrahydrofolate (5-CH3-THF) which is then converted to tetrahydrofolate (THF). Methionine is further converted to S-Adenosylmethionine (SAM) through the activity of methionine adenosyltransferase. SAM is the major methyl donor for all methyltransferases enzymes, which add methyl groups to various acceptor molecules such as DNA, RNA, phospholipids and proteins. SAM is then converted to S-Adenosylhomocysteine (SAH), which is then reversibly converted to HCY in a reaction catalyzed by SAH-hydrolase. HCY is either re-methylated back to methionine or transsulfurated to glutathione (GSH), the major cellular antioxidant. 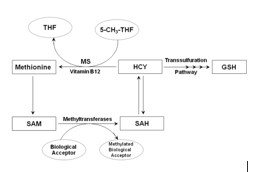 Folate-dependent transulfuration pathway is the precursor for de-novo synthesis of reduced glutathione (GSH), a tripeptide of glutamic acid, cysteine, and glycine. GSH is the major intracellular antioxidant and it undergoes oxidation to the disulfide form (GSSG), oxidized form, when scavenging reactive oxygen species (ROS) that are highly unstable molecules. In healthy cells and tissues, more than 90% of the total glutathione pool is in the reduced form (GSH), and less than 10% exists in the disulfide form (GSSG), and a reduced GSH/GSSG ratio is an indication of oxidative stress (37, 38).  Oxidative stress is a condition under which the intracellular antioxidant (GSH), antioxidant enzymes (glutathione peroxidase, superoxide dismutase, and catalase), and dietary antioxidants (vitamin C, selenium, β carotene and vitamin E) are not counterbalancing the ROS, and subsequently induce cellular damage which is involved in the pathogenesis of cancer. Vegetables and fruits are good sources of antioxidants that provide a protective effect against the ROS-mediated DNA and lipids cell membrane structures damage in proliferated cells (39, 40).

In conclusion various Western studies have revealed that CRC carcinogenesis is modifiable in accordance to certain dietary factors with potential anticancer properties. Such studies are needed to be conducted in the Arabian Gulf region, in order to address the intake of bioactive food components in the diet consumed by vulnerable groups at risk for CRC. Addressing the physical activity is an asset to develop a multidisciplinary approach for the primary prevention of CRC among high risk population. In the Arabian Gulf region, primary prevention of CRC is feasible through intervention programs such as; establishing a biochemical profile for early diagnosis of CRC and adopting long-term behavior modifications in food choices, dietary pattern and physical activity.